At the beginning of 1848, a carpenter named James Marshall was working on building a sawmill near Sacramento, California when he found gold. Although he and his employer tried to keep the discovery quiet, news started to spread. Sam Brannan, a shop owner in nearby San Francisco, looked to cash in, not by mining but by selling equipment to prospectors. He initially announced the great gold hope in the streets and then he sent publications east. Initial reports around the country were greeted by skepticism. But, in December, President Polk confirmed the abundance of gold in California. By 1849, the rush was on. The hope-filled prospectors looking to strike it rich became known as “The 49ers”. Unfortunately, some thought they struck it rich only to find out that the shiny, gold substance was only pyrite. It is otherwise known as “fool’s gold”. While gold is both soft and nearly indestructible, pyrite is brittle and breaks apart easily. Another way to tell the difference is during panning; pyrite is lighter and will easily move around the pan with the water while gold will normally stay in the same place.

We have all lied at times, but a person who makes it a habit, even about small things, cannot be trusted. The relationship will only end in frustration and disappointment, perhaps worse. The thing I would tell my son to look out for is how she speaks about people. Is she nice to people when they are around, but speaks badly about them when they leave? If so, then watch out.

She cares most about surface things and first world problems, namely involving her. Shallow people have limited emotional depth because they don’t invest thought and energy in them. Caring little for the needs of others, she also tends to make snap judgments without knowledge and lacks empathy. Many teenagers have a self-focus and have only realized a certain amount of emotional maturity. However, I would caution my son with the question, “How does she respond to people in pain?” If there is a lack of concern, don’t waste your time.

It’s not just that she is fixated on how she looks, but she is focused on herself. People who are vain will tend to focus their energy on creating a picture of what looks good rather than developing the heart and authentic friendships. Relationships come in and out of their life with little care. I would tell my son to look for a couple of warning signs. How often is she taking selfies, looking at those pictures, or in a mirror? What does her friend history look like? If the answers are quite a bit and a revolving door of friends, those are major red flags.

When she places the value of things over people, she can’t be counted on. Materialistic people will be the first to cut and run when things get difficult. A relationship with her is like building a house in the sand. It won’t last. I want my son to only build relationships with people that will hang in there when things are hard. He needs to pay attention to how much she talks about having expensive things. Does she try to impress others with them or take excessive pride in them?

She consistently breaks promises and doesn’t keep her word. There is no follow through. It is a recipe for a painful relationship, potential cheating, and not worth his time. The question I would ask him is, “How often does she do what she says she’s going to do?” If she doesn’t walk her talk, find a girl who does. There are plenty out there.

To ask these dating and other questions to your son, try using the Q & U: Questions to Connect App.

Huddle up with your kids and ask, “Why is it important to look past the way people look?” 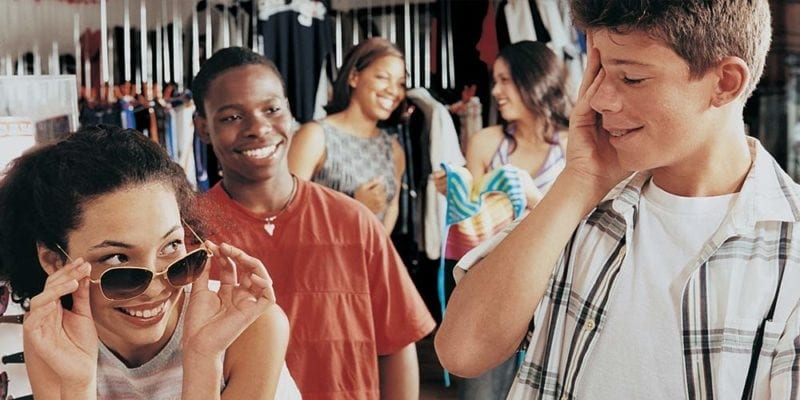 Teaching My Son How to Talk to Girls