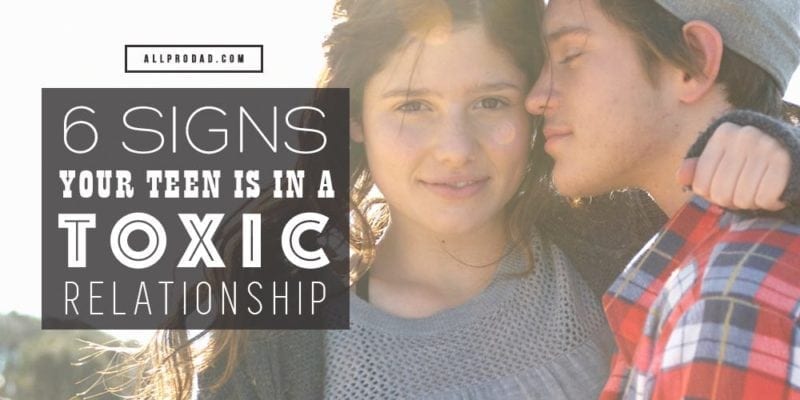 6 Signs Your Teen is in a Toxic Relationship

Moving into the phase where children become aware of their sexual feelings is difficult enough. After they actually start dating, parenting reaches a whole new level of complicated. This was particularly the case for a friend of mine whose son became involved in a toxic relationship while in high school. On the surface, the relationship seemed fine, but deep down he felt like something was off. At first, he attributed it to his own discomfort to this new phase of life. Eventually, he realized that wasn’t the case. The relationship was unhealthy and he wasn’t the only one who was seeing it. By the time he and the rest of his family started to talk to his son about the relationship it was like he was caught in a deep pit. Nothing they said could break him out of it, not even when his friends began voicing the same concerns. Finally, his girlfriend broke up with him and after time apart his son was able to see the truth, but not before a lot of damage had been done.

Although the signs were there it took a long time for them to act. By the time they did their son was so ingrained in the relationship he could no longer hear their concerns. Fortunately, it eventually ended. If your teen is in a relationship make sure it doesn’t become toxic. If you see any of the following 6 signs intervene immediately.

1. They separate themselves from friends and family.

It’s common for teens to separate from their families, particularly parents, during adolescence. However, when they do it after entering a relationship it is a red flag. When they spend considerably less time with their friends, especially if they lose them altogether, the alarm bells should go off. There could be a number of reasons involved in their isolation. They have become obsessed with the person they are dating or the other person is controlling and possessive. If you see a sudden change in their friend or family relationships sit down and talk to them about your concerns. This would be a good time to set boundaries or schedule consistent family time.

If there are sudden changes in the clothes they wear or hairstyle it could mean they are changing themselves to appeal to the other person. Relationships should bring personal growth and sometimes that means learning to look more presentable. There’s also nothing wrong with trying new looks, but when teens feel pressure to look or dress a certain way to earn affection it has turned toxic. It’s a signal that your teen has low self-esteem or has become dependent on the sense of belonging the other person’s approval gives them. Ask them questions about how they feel about themselves. Get a discussion going. One revealing question could be, “What is one thing you would change about yourself?” You’ll probably be surprised by the answer.

Being in a relationship with a toxic person, no matter what type, is not a safe place. It usually has an effect on the victim’s emotional state of being. If you see them go from being a lively, upbeat person to more quiet, depressed, withdrawn, suspicious, or melancholy talk to them about it as soon as possible. Any personality change is a sign they are being belittled, controlled, or are so tangled they are following the emotional roller coaster of their boyfriend or girlfriend. They are carrying a heaviness that comes from the instability, and possibly the abuse, of the relationship.

4. They repeatedly make excuses for the other person’s bad behavior.

When you hear them apologize on behalf of the person they are dating it’s a signal their sense of self may be wrapped up in that person. They actually start taking partial or full responsibility for the other’s wrongdoing.

Many times a toxic relationship is like being in prison with a fear of parole. They recognize the dysfunction but minimize the severity of it for fear of life without that person. They end up afraid to confront things that are wrong because it could lead to the end of the relationship. As a result, they attempt to convince others and themselves that things aren’t that bad. Another situation is they become so enamored with the person they actually can’t see the wrongdoing. In their mind the person is perfect. They almost begin to worship that person. This opens the door for a lot of power and manipulation.

6. There always seems to be drama.

Huddle up with your kids and ask, “What does it mean to be a good friend?”

Dating Rules for My Daughter and Her Boyfriend