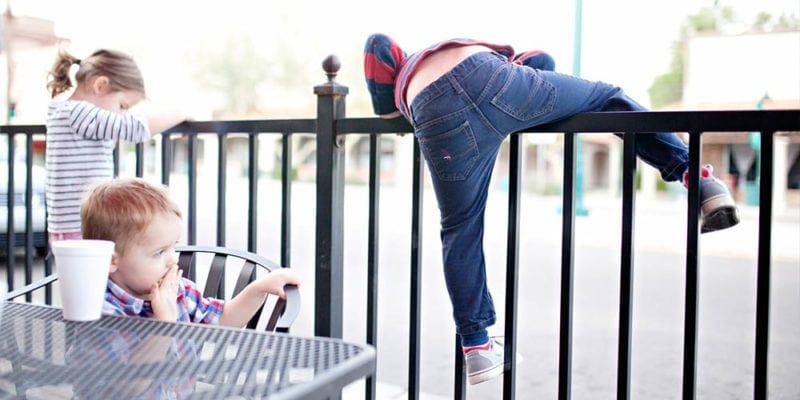 4 Bad Things Your Kids Do That Should Make You Proud

I grew up on ’80s movies. In one of them, John Cusack plays Gib, a college student traveling across the country with another student named Alison. When they lose all their money, they sit on the side of the road in the middle of nowhere in the dead of winter with only gum to satisfy their hunger. To Alison’s dismay, Gib starts complaining: “I’m starving. I’m freezing to death. My feet are killing me. I just swallowed my gum.” Finally, Alison challenges him: “Your incessant complaining isn’t doing us any good. Can’t you look on the bright side?!” Then it starts pouring rain.

Like for Gib on a trip across the country, it can be tough to see the bright side when your kids exhibit bad behavior. We envision our kids going down a troubling path and how it’ll hurt them. However, there are some good things in bad behavior that we miss when we are focused on the negative. While bad behavior is still bad and needs correction, it’s important to recognize the character traits in it that will serve kids well. Here are 4 bad things kids do that can make you proud—at least partially.

In our house, lying is the worst offense because of its impact on trust and relationships. It’s one of the most important acts to correct. However, lying shows significant brain development in intelligence, foresight, strategy, imagination, and creativity. To tell an effective lie, people have to be able to think about the end goal and create a reality that fits and helps them reach that goal. The more elaborate the lie, the more creativity involved.

Takeaway: Affirm these positive attributes and promote ways for your kids to nurture them in a healthy manner.

I once went into the backyard and found my seven-year-old son on the roof. After he came down at my command, I asked him how he got up there. He said, “There are three ways to get on the roof.” When kids engage in dangerous behavior, it reveals curiosity, imagination, and a sense of adventure. According to Harvard Business Review, people who are curious have a “hungry mind,” which leads to higher intellect.

Takeaway: While we need to protect our children from recklessness, we need to give them room to explore and risk—even when that risk involves possible injury.

The willful child is exhausting. I know—I have one. The good news is a willful child possesses individual thought. A person who is willful is less likely to follow the crowd or adhere to peer pressure. Be patient, consistent, and firm with your willful child as you reinforce the right way not just to act but also to think. It may be hard today, but it most likely will pay off in the long run.

Takeaway: Behavior modification won’t work. Your point of impact needs to be focused on molding the motivation and attitude that cause the behavior.

Fighting should be discouraged and only used as a last source of defense. When children are quick to come to blows, it unveils a number of traits. Plenty of them are negative, but some are good, such as courage, determination, and a willingness to stand up for themselves or those they care about. Fighting is an emotionally difficult and taxing experience, even for those who seem to invite it. A part of the discussion with children should involve building them back up by expressing these admirable qualities they displayed. Then show them more productive ways to live them out.

Takeaway: Teach your kids how to stand up for themselves, both physically and emotionally. When they do, affirm them.

Sound off: What are some other positive characteristics we draw out from our kids’ bad behavior?

Huddle up with your kids and ask, “What is one thing you want to do that you think you’d get in trouble for doing?”