The explosion seemingly came out of nowhere. The Apollo 13 spacecraft was in its second day of travel, cruising easily to the moon. Ironically, the date was April 13th, when the trip instantaneously went from smooth sailing to a desperate fight to save the crew. The moon landing had to be abandoned as it now became a rescue mission. The problem began years earlier in one of the oxygen tanks. Although the tank looked fine on the outside, it had become damaged on the inside. Fortunately, the brilliance of the ground crew and the astronauts themselves allowed for their safe return.

Problems below the surface eventually show themselves, many times in ugly or explosive ways. One of those problems is when you are married with secrets that you are keeping from your spouse. If love, trust, and intimacy are the oxygen that fuels your marriage, having secrets is like putting faulty wires in the tank. The results can be catastrophic. On the surface, it may seem like your marriage is smooth sailing, but one minute later, it’s in a fight for its life when those secrets blow up. Here are 5 secrets spouses keep that hurt their marriage.

1. Unhappiness in the Marriage

Many people wander into a place where they are discontent with their marriage. The reasons for keeping it a secret could be fear of hurting feelings, thinking the problems will eventually sort themselves out, or maybe they just don’t want to admit that they have become unhappy. Sometimes it’s no one’s fault in particular. Sometimes bad habits have developed by both that just need work. In the end, though, the problem(s) is (are) not going to go away by themselves. They have to be brought into the open and dealt with. Otherwise, you and your spouse will continue to separate.

2. Fulfilling Intimacy Desires from Someone or Something Other Than a Spouse

Sex is designed to build intimacy between a husband and wife.It’s easy to see how an affair is hurtful to a marriage. But it’s the subtle things that are easily missed or justified long before an affair starts that lay the groundwork for disconnection. Sex is designed to build intimacy between a husband and wife. Sexual satisfaction and fulfillment are reserved for a spouse. When sex is lacking, it needs to be addressed, talked about, and resolved. Counseling should be sought. When a spouse secretly seeks to satisfy him/herself sexually through masturbation, pornography, or an affair, it destroys intimacy. The soul bonds with those other things rather than the spouse. With every sexual engagement apart from the spouse, the desire for that spouse gets duller until the fire finally goes out.

No matter who is the primary breadwinner, in marriage, the money belongs to both of you, unless you have come to some sort of divided monetary agreement. Disagreements need to be talked about and worked out, not hidden. When one party makes financial decisions in secret that violate the couple’s agreement, it is a form of financial infidelity. One of the most important ingredients for a thriving marriage is trust. Keeping spending secrets is a major violation of trust and a fast track to disaster.

Quietly disagreeing with a decision a spouse makes undermines the relationship in two ways. First, it’s a silent lie. Dishonesty equals disunity. Second, feelings of disagreement have to settle somewhere, and when they are unresolved, they usually turn into resentment. Third, a married couple should always think of themselves as having one brain. Working through disagreement causes us to make more informed decisions, even when it is frustrating. Supreme Court Justice Ruth Ginsberg couldn’t have been more opposite as recently deceased Justice Antonin Scalia. However, in a moving tribute to Scalia, she said that when they disagreed her final opinion was always better because he was able to clearly state all of the weak points in his dissent. Silent dissent makes the relationship and the spouse weaker.

Our past relationships significantly impact our current ones. We bring all of the wounds, baggage, and dysfunction they have caused into the marriage. Hiding it only leaves a spouse confused and separated. It is like a wall between one another. Do you have to share with one another all of the things you did physically in previous relationships? No. But it is important for them to know the level of intimacy and how you were affected by it. It’s good for them to know what went right and what went wrong. It helps them to know you better and how your past relational experience has formed you.

Huddle up with your kids and ask, “How does keeping secrets (not surprises) hurt relationships?” 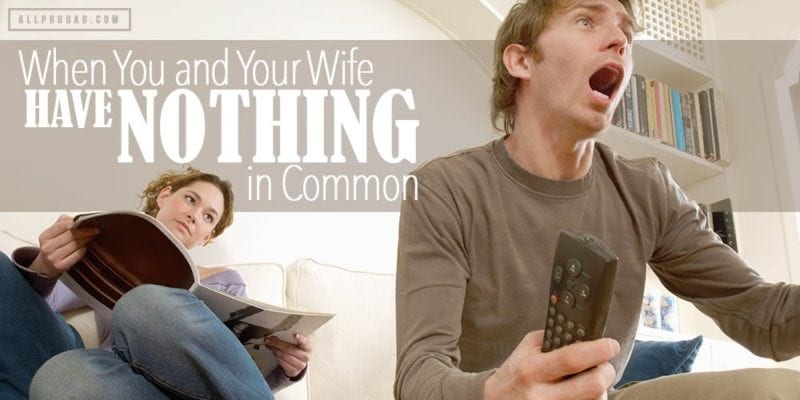 When You and Your Wife Have Nothing in Common