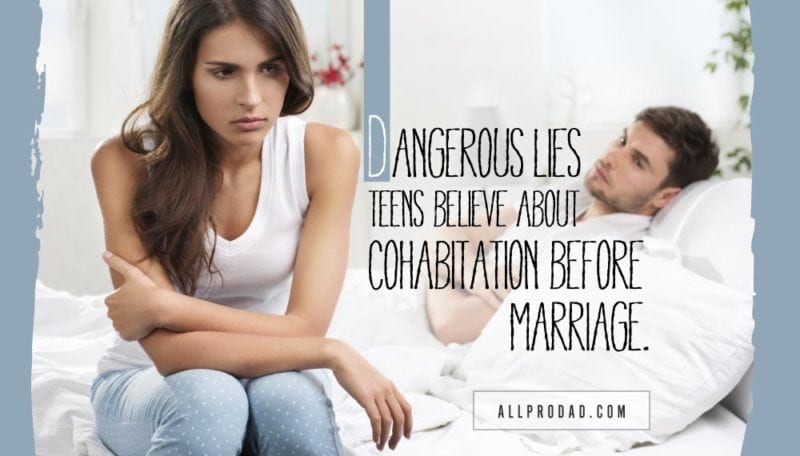 One of my favorite movies is He’s Just Not That Into You. I like the humor but also the raw honesty about relational angst, heartbreak, and hope. The movie is about the lies we believe about relationships, particularly when someone doesn’t share the same attraction we have for them. The characters struggle through these lies, eventually discovering the real picture. It even addresses the subject of cohabitation. Two of the characters are an unmarried couple living together played by Jennifer Aniston and Ben Affleck. She wants to get married while he proclaims he doesn’t believe in it. A number of problems ensue.

It will save us from the pain of divorce.

Most teens believe that because living together gives you the opportunity to get to know one another better, you’ll make a more informed decision regarding marriage. The likeliness of going through divorce goes down. The fact is: The statistics don’t back this up. At best, couples who live together before marriage are on average, at least, just as likely to get divorced. There is plenty of data that even points the other way. One of the clear dangers in the statement above is that the emotional entanglement of cohabiting before marriage is being drastically understated. When two people live together, their lives become intertwined. The breakup may not have the legal implications, but the emotional investment causes a mess and pain similar to a divorce. According to Professors of Psychology Galena Rhoades and Scott Stanley from the University of Denver, people may tend to stay in relationships they shouldn’t when cohabiting. It is probably an attempt to avoid the pain of the breakup only to experience a divorce or lower quality of marriage later.

Most teens believe that moving in together while dating is the most natural and beneficial process leading to marriage. In a study done by Rhoades and Stanley, they found that the more intimate relationships people had, the less satisfied they were in their marriage down the road. Dr. Rhoades makes the argument that normally experience leads to better results, but when it comes to relationships, the results of the study, on average, showed the opposite. They theorized three reasons to explain why. First, people with more past intimate relationships have more of a knowledge of their options causing them to have a difficult time committing to a marriage. Second, they have more things to compare with their current relationship. They can feel like the grass was greener in past relationships, sexually, emotionally or other ways. The final possible explanation she proposes is that since they have more experience ending relationships, it might cause them to focus on the negatives in a relationship or that breaking up is inevitable.

You need to know if you can live together.

Rich and long-lasting relationships come from making a strong decision of commitment.The belief is that you have to live together so you can see the real person. This becomes problematic because there is never a strong decision or commitment made to one another. Dr. Stanley discusses a concept called “sliding versus deciding.” He asserts that most people who live together “slide” into it. It starts with staying over here and there then becomes more consistent. Finally, one of their leases ends and the cohabitation becomes permanent. When people slide into major decisions in life, it ultimately sets them up for less follow through than making a strong decision. This may account for the fact that arranged marriages have such a considerably lower divorce rate. Apologist and speaker Ravi Zacharias’ brother who married a girl his family picked out for him said, “Love is as much an act of the will as it is an emotion.” People change significantly in a lifetime. Rich and long-lasting relationships come from making a strong decision of commitment. Cohabitating before marriage is not conducive to that, but waiting is.

Source: “Before I Do”, The National Marriage Project at the University of Virginia by Dr. Galena Rhoades and Dr. Scott Stanley

Huddle up with your kids and ask, “Why is commitment in a relationship important?”